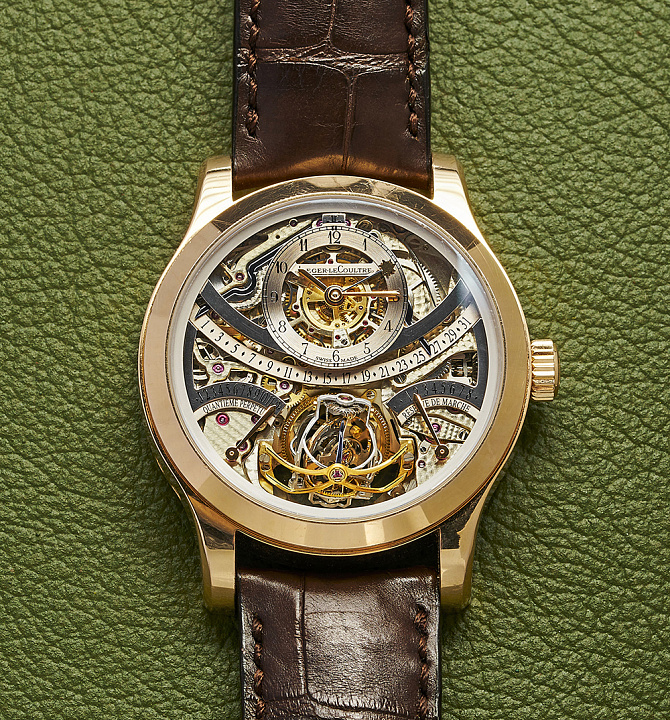 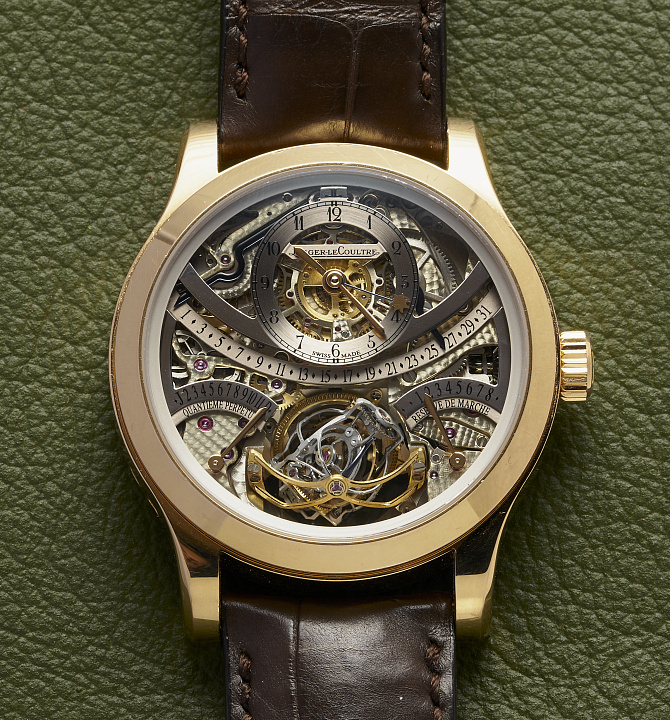 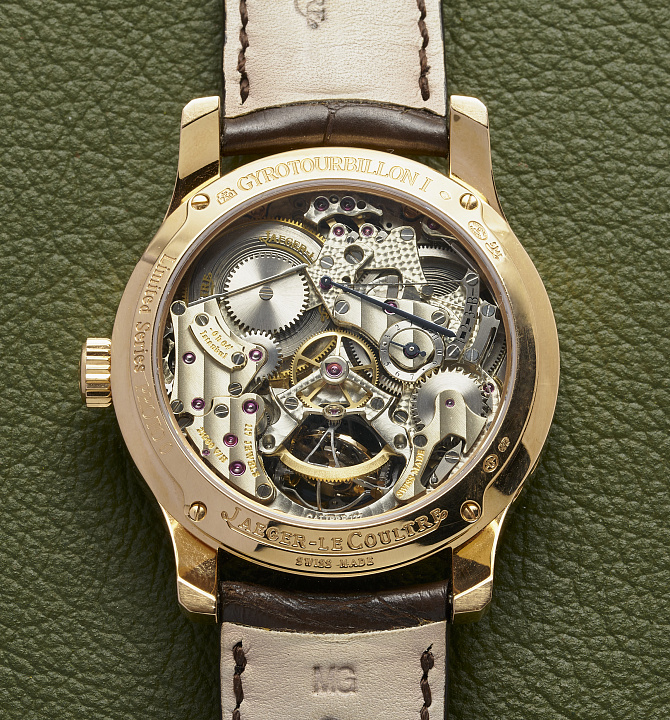 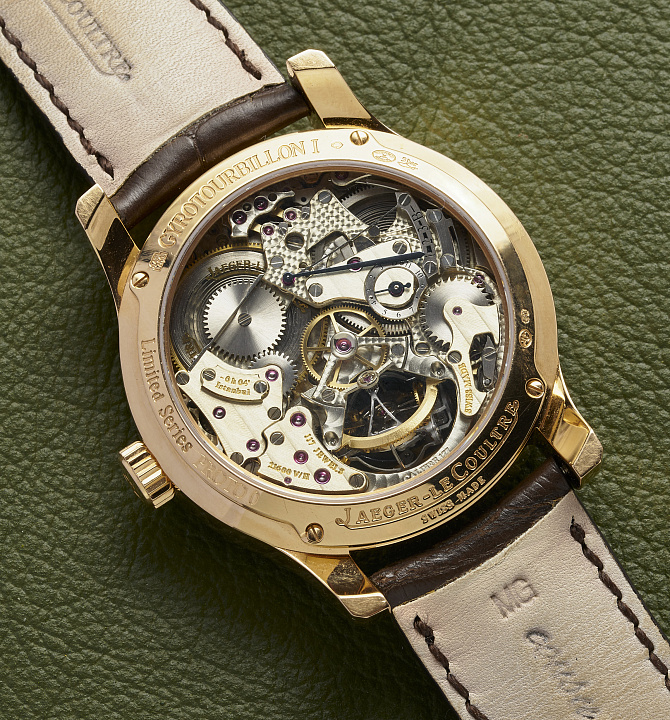 A very attractive, highly complicated and probably unique rose gold prototype of limited edition, produced by the famous Swiss watch brand Jaeger-LeCoultre, founded in 1833. Reference launched in 2012. Case made of 18k rose gold, diameter 43mm, 15mm thick, open-worked dial, sapphire caseback. Hand-wound caliber 177, double barrel, power reserve up to 8 days. Functions – indication of time in hours and minutes at 12 o’clock, double-axis spherical tourbillon at 6 o’clock, perpetual calendar with four retrograde hands (two for the date, one for the month and one for the leap-year on the back side of the caliber), running equation of time minute hand with solar sign, power reserve indicator and additional month indicator on the back side of a caliber. Brown Jaeger-LeCoultre leather strap with 18k rose gold Jaeger-LeCoultre pin buckle.

The Jaeger-LeCoultre Master Gyrotourbillon I Ref. Q6002420 Limited-edition Prototype 0 appears to be a fine purchase for a collector or haute horlogerie afficionado as a watch featuring a widely celebrated design and complications concept, unique in modern watchmaking. Peculiar high-mech aesthetics are embedded with traditional fine finishing and breakthrough inventions. It is a beautiful, extremely rare and unprecedented complicated mechanical watch from a world-famous traditional watch brand, one of the undoubted leaders in the haute horlogerie watch market. A recognisable and instantly memorable design undoubtedly adds to the appeal of this lot.

The Master Gyrotourbillon 1, featuring Jaeger-LeCoultre’s first double-axis spherical tourbillon, was introduced in 2004. This was one of the earliest watches of its kind in watchmaking. The first double-axis tourbillon wristwatch of serial production had been introduced just a year earlier by Franck Muller (in the Revolution 2 Tourbillon Ref. 7850 TRev2).

In contrast to traditional movements, which are characterized by a planar architecture, this spherical tourbillon rotates in two planes at the same time. This compensates for the negative effect of gravity on wristwatch accuracy more efficiently than a conventional ‘flat’ tourbillon, originally invented for use in pocket watches. The assembly and adjustment of such a complication not only require highly-qualified and experienced experts, but also less tangible qualities from a watchmaker who is able to think outside the box. Jaeger-LeCoultre refer to such a tourbillon as a gyrotourbillon, and the launch of the first gyrotourbillon wristwatch is associated with the watchmaker Eric Coudray, who was able to launch an unprecedented design for the brand (before leaving Jaeger-LeCoultre in 2011). Eric Coudray’s outer gyrotourbillon carriage rotates every sixty seconds and carries an inner carriage with the balance, hairspring, and escapement, while the inner carriage rotates every 24 seconds.

In contrast to traditional movements, which are characterized by a planar architecture, this spherical tourbillon rotates in two planes at the same time.

The initial version of the Gyrotourbillon 1, launched in 2004 in a platinum case (in a limited edition of 75 pieces), was offered with a spectacular two-tone dial (with a frosted glass upper zone). The 2009 Hybris Mechanica 55 Gyrotourbillon, in white gold, featured an open-worked dial, a design adapted in the present rose gold limited edition, and launched in 2012. Both of these open-worked dial versions are extremely rare on the market.

The present example is a pre-production prototype of a limited edition of 28 (or 30) pieces, as evidenced by the engraved inscription “Limited Series Proto 0” on the rim of the case back. A special plaque on the movement with an engraved inscription “Istanbul -0h 04’” (the offset of the mean meridian solar time at the longitude of Istanbul) suggests that this prototype was purchased by a client from Turkey. This limited edition is considered to mark the end of the serial model’s availability, although some unique pieces appeared in 2017 and 2019 as part of the Hybris Artistica collection.

The open-worked dial architecture enables the complex caliber to be viewed from the dial side, allowing Jaeger-LeCoultre to demonstrate the fine finishing of the movement’s parts. Particularly noteworthy are the uncoated nickel silver mainplate and bridges, which reveal chamfered and polished bevels, as well as perlage of various sizes on the dial side, completed with Côtes de Genève and engraved gilded inscriptions on the bridges on the back of the caliber.

The present example is a pre-production prototype of a limited edition of 28 (or 30) pieces, as evidenced by the engraved inscription “Limited Series Proto 0” on the rim of the case back.

In addition to the gyrotourbillon, the movement offers an extraordinary perpetual calendar with double-sided indication (month and leap year on the back) with four retrograde hands, including the aforementioned leap year indicator, a month hand, and two large date hands, with the hand on the left indicating the dates 1 through 16, and the hand on the right indicating the dates from 16 through 31. Both hands meet on the 16th of every month, before the hand on the left retreats to its resting point. Two barrels ensure the caliber’s power reserve of eight days. 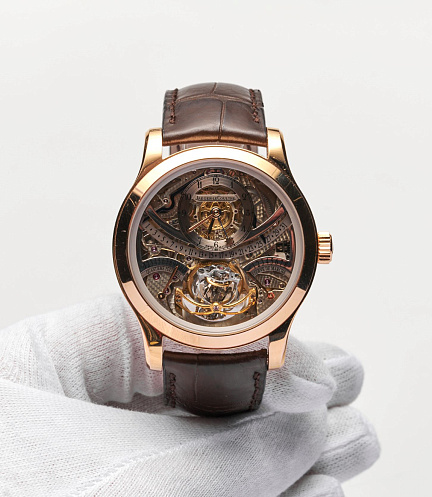 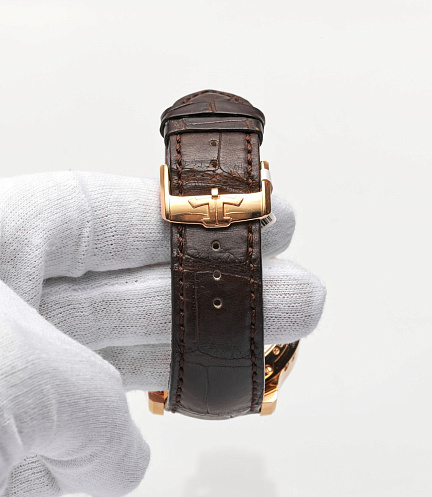 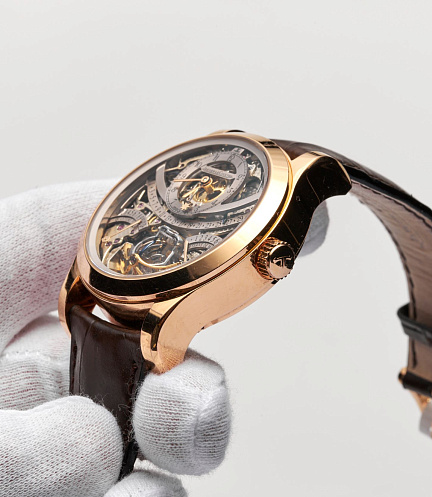 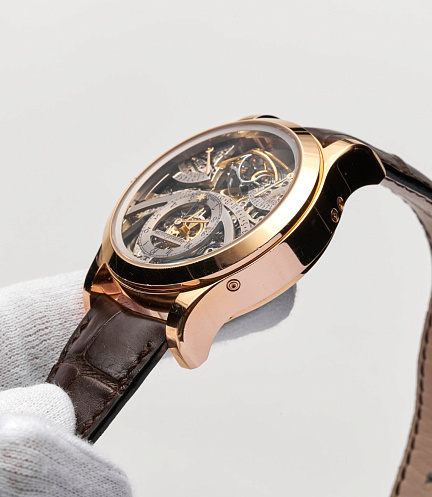 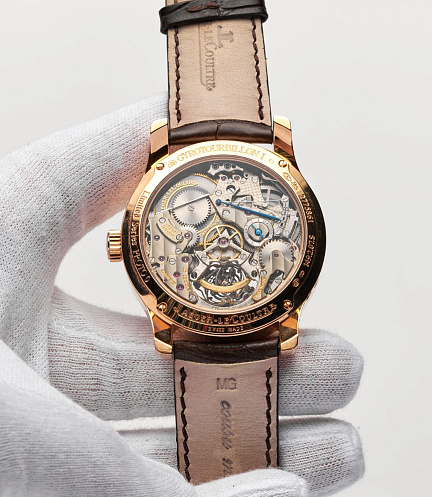 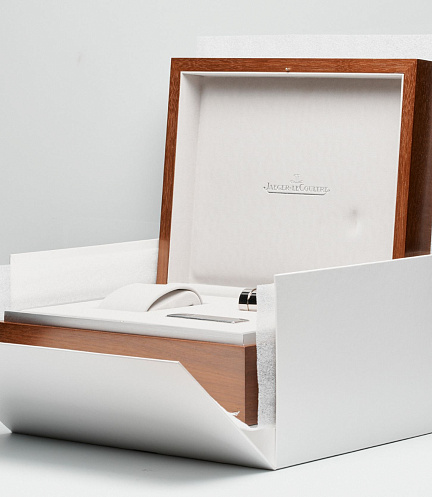 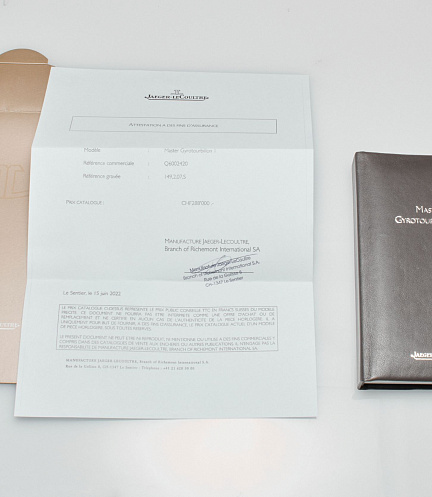